When in Portland, consider dining a serious endeavor. Portland is naturally associated with great seafood but, do make a trip to the Pearl District downtown to sample the fare of lively brewpubs and some great international cuisine. There is also entertainment in watching the colorful people who populate the downtown area.

What was once a decaying industrial warehouse area in downtown Portland, the Pearl District has undergone significant renovation and is now Portland’s premier urban-chic neighborhood. Many of the aging warehouses have been turned into luxurious lofts, townhouses, and condos. Examples are the old Meier and Frank warehouse conversion into The Avenue Lofts and the Irving Street Lofts which once housed the Blumauer-Frank Drug Company. Recently erected buildings that have sprouted throughout the district are sold-out before construction even begins. 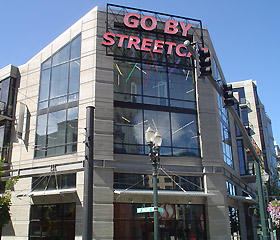 As Pearl’s population expands, so do the dining options. One of the local hot spots at lunchtime is the Daily Café at 902 NW 13th Avenue which serves up a great grilled meat or vegetable panini as well as tasty salads. Another favorite is Hot Lips Pizza located at 721 NW 9th Avenue. They use fresh local ingredients and offer pizza by the slice. Bridgeport Brew Pub is located next door to Oregon’s oldest craft brewery at 1313 NW Marshall Street. It features hand-tossed pizza, sandwiches, and of course, Bridgeport’s finest ales.

Cosmopolitan dining in The Pearl can be found at the nationally-recognized Bluehour, 250 NW 13th Avenue, which offers fine French and Italian Cuisine. Oba! Restaurant, 555 NW 12th Avenue, presents a menu inspired by the Latin cultures of the world. Pho Van Vietnamese Bistro is a long-time Portland favorite that has opened a new restaurant in the Pearl District at 1012 NW Glisan.

The Portland Streetcar serves the Pearl District and runs a 4.8 continuous loop from Portland State University District to Legacy Good Samaritan Hospital at NW 23rd Avenue. The Streetcar connects to the MAX rail line which runs from Downtown Portland to Gresham to the east and Hillsboro to the west.

World-class artists are emerging from Pearl District art galleries. First Thursday is a popular traditional event with galleries showcasing the best of local artists as well as live music and wine tasting. Some of The Pearl’s finest galleries are Butters Gallery and the Laura Russo Gallery. Contemporary favorites include the Mark Woolley Gallery and the Blackfish Gallery. Bullseye Connection Gallery and Gallery 33 both feature art glass and the Portland Institute of Contemporary Art is a venue for performance and visual art.

Powell’s City of Books, a Portland icon, is the world’s largest independent bookstore in the United States and occupies a full city block between NW 10th and 11th Avenues and Burnside and Couch Streets.

Explore The Pearl
explorethepearl.com
The Pearl District Business Association is a non-profit organization with the mission to promote the Pearl District as the region’s premier destination for shopping, dining, art, and living. Our goal is to enhance the vitality of business by providing value to our members and to our community.

Pearl District | The Official Guide to Portland
travelportland.com/neighborhoods/pearl-district/
In the Pearl, loading docks and cobblestone streets hint at this former warehouse district’s past, while stylish bars and gleaming lofts point toward the future. Read on for our favorite things to do and see in Northwest Portland’s Pearl District.

Visit Pearl District: Best of Pearl District, Portland
expedia.com/Portland-Pearl-District.dx6161282
Portland’s Pearl District is a lively neighborhood with restaurants, parks, boutiques and galleries alongside homes and offices. Come to the festivals and events throughout the year for eclectic entertainment and fun activities.

The 10 Best Portland Pearl District Tours & Tickets
viator.com/Portland-attractions/Pearl-District/d5065-a8024
Explore Portland on a 3.5-hour city sightseeing tour that travels from downtown Portland to the Pearl District to Nob Hill. Take a tour of the Pittock Mansion and see Lan Su Chinese Garden, a collaboration between Portland and sister-city Suzhou, China.

Pearl District Shopping | The Official Guide to Portland
travelportland.com/neighborhoods/pearl-district-shopping/
The Pearl is one of Portland’s top shopping destinations. The walkable former warehouse district adjacent to downtown houses a wide range of national and international retailers, as well as homegrown favorites — from the world’s largest independent bookstore to locally owned boutiques.

Pearl District W Burnside St & NW Broadway Portland, OR …
mapquest.com/us/oregon/pearl-district-304589515
The name, the Pearl District, was cemented in Portland culture around 1988 by the local newspaper, The Oregonian. The PD is the former heart of light-industrial warehousing and railroad yards for…

Where to Eat and Drink in Portland’s Pearl District …
pdx.eater.com/maps/restaurants-bars-pearl-district-portland
The Pearl isn’t exactly a mecca for Mexican food, so when Carlita’s opened in 2017, it not only filled that gap, but did so in way custom-tailored for the swank Pearl. An upscale spot with a New York vibe, Carlita’s focuses as much on carefully crafted whiskey and agave cocktails as on the tacos themselves.

Pearl District (Portland) – 2020 All You Need to Know …
.tripadvisor.com/Attraction_Review-g52024-d146839-Reviews-or10-Pearl_District-Portland_Oregon.html
Then this is your spot. Portland is a lovely place, but the blight of the homeless problem that is everywhere is much worse in the Pearl District. Here you’ve been transported by to New York in the 1970s. Filth, decrepit buildings, half-naked homeless drug addicts serenading, …