Downtown Portland is generally where you’ll want to spend the majority of your time and (if you can afford it) stay. The downtown region is located on the west side of the Willamette River and extends about from the river to I-405 (which enters the city around 14th Avenue, or 14 blocks from the river), as well as from the Portland State University campus (around Salmon Street) north to Burnside Street (or about eight blocks). It’s compact and walkable, with lots of great shops, restaurants, theaters, and museums.

Portland’s downtown blocks may appear to be short to you, and that’s because they are – each block is a square with around 200 feet on each side (as opposed to some of the blocks in Manhattan which can be 800ft long). This was done on purpose since more corners meant more valuable corner real estate, but the benefit is that downtown Portland is easy to navigate on foot.

If your feet become tired or your numerous shopping bags become too heavy, you can take advantage of Portland’s well-known light rail system, known as MAX, which runs through downtown Portland in what is known as the “fareless square.” The MAX train travels west on Morrison, east on Yamhill, and north/south on 1st Ave. – and you may ride MAX for free if you stay in downtown. (There are a few more sites outside of downtown that are also part of the “fareless square,” but we’ll cover those in another piece.)

The US Bancorp Tower, nicknamed “Big Pink” because it’s, well, big and pink; the KOIN Center, with its distinctive pyramid-shaped top; and the Portland Building at SW 5th and Madison, designed by Michael Graves in the 1980s and featuring the famous statue of the pitchfork-wielding Portlandia over the front door, are just a few of the notable buildings in downtown Portland.

If you happen to be in Portland during the summer, you’ll be glad to know that one of the city’s benefactors had you in mind back in the early 1900s. Simon Benson, a prominent Portland businessman, and philanthropist, contributed the funds to provide 20 drinking fountains in downtown Portland. These fountains, known as “Benson Bubblers,” dot the city and are still in use today. The water is chilly and tasty.

Downtown Portland has no shortage of shops, cafes, and restaurants, ranging from the upscale Saks Fifth Avenue (on, where else, SW 5th Avenue) and Nordstrom to shops like Portland’s own Moonstruck Chocolates and smaller and funkier family enterprises that will give you a taste of what Portland is all about. There are also a few movie theaters downtown, both for huge blockbuster films and for independent art house films. In sum, you could spend weeks contentedly living within the roughly 100 city blocks that comprise downtown and never become bored.

In the heart of downtown Portland is the square affectionately known as “Portland’s Living Room,” Pioneer Courthouse Square. It’s a brick-covered square that takes up a city block and actually sinks away from ground level on one corner in order to create an amphitheater shape. Consequently, it’s the perfect spot for the many festivals and public concerts that take up the square during the summer. Even when it’s unoccupied, however, it’s a popular place for Portlanders to hang out, eat lunch or read the paper. The Starbucks on the corner of the square is a common meeting point for friends, as well. 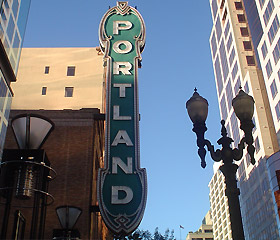